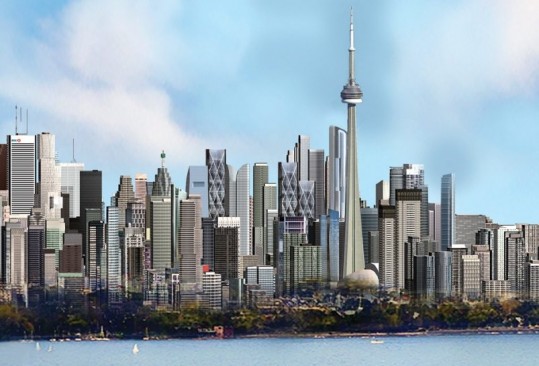 So many things have changed in Toronto in the past few decades. Just a little over 3 decades ago, Toronto didn’t have a city skyline, trolleybuses were still in some streets, and well-known hubs that we have today were still industrial zones that were up for renewal. If we’re going to imagine possible future changes 30 years into the future and use the dramatic developments we’ve had for the past 30 years as a model, Toronto in 2050 might be almost unrecognizable for some although historic areas might remain almost suspended in time.

The truth is, nobody can be certain how things will turn out for Toronto. There are too many variables to consider and we can’t be sure what further developments will take place in the future. What we can do is guess and guess we will! See what might be in store for Toronto 30 years from now below!

The PATH system can be expected to stretch further and to more areas, possibly eliminating the need to ever walk outside during winter. Isn’t this neat?

The town layout might change by a lot with the introduction of new streets and new street design that cater to pedestrians and cyclists.

Some well-loved buildings might be replaced by new ones or demolished to give way to new green spaces as the town layout gets a revamp. Even the waterfront could get a completely new façade!

Torontonians have always loved green spaces so it can only be expected that more green spaces will sprout all over Toronto. These won’t be limited to traditional parks and conservation areas but more along the lines of a roof forest over a newly built indoor stadium. Isn’t that a future worth looking forward to?

There is no doubt that the city will be denser than ever, with high-rise residential buildings probably dominating major development areas. Parkdale will probably have an entire line up of new condominiums while new residential areas will rise near new LRT destinations.

If you’re expecting people hooked up to simulations as a form of entertainment, things can go the other way and more outdoor and indoor recreational spaces could be built.

We are currently having a population boom in Toronto and this is bound to grow more in the future. Urban planners estimate that the GTA will be home to about 10 million while those who will be residing in Toronto will be around 4 million.

It is hard to believe that there could be more train transit projects in the future given that there are already quite a lot of projects now such as Eglinton Crosstown, Sheppard East LRT, Spadina Extension, and Finch West LRT but Toronto is still planning to further expand its rapid train transit network.

Are you looking forward to the future Toronto 30 years from now? Why not invest in a Toronto home and watch the amazing new developments unfold before your eyes? We’ve got you covered at feeDuck if you want to save money by looking for low commission real estate agents in Toronto. At feeDuck, professional low commission realtors in Toronto will answer your home buying questions to make sure that you won’t be compromising when buying a home.