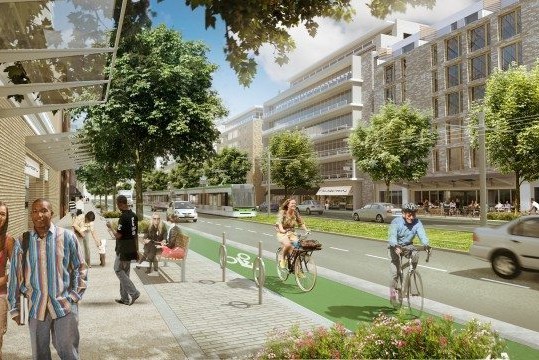 This year is an exciting year for Eglinton in Toronto. May 2019 set the wheels turning for a streetscape overhaul in Eglinton Avenue with the proposed changes encompassing Jane Street to Kennedy Road together with more changes brought in by the Crosstown Light Rail Transit Line. A very exciting time for those who plan to move to Eglinton or want to invest in an Eglinton home.

What Is Eglinton Connects?

Eglinton Connects is a study about the city plan for Toronto that talks about the revitalization of the 19-kilometre corridor of Eglinton Avenue. 3 Studies have been assessed back in May 2019 to determine the feasibility of the project as well as benefits from it for the long-term development of Eglinton.

With Eglinton Connects, 38 kilometres of separated bike lanes will be created along Eglinton Avenue together with the creation of about 20 hectares of new open spaces and parks. The project also talks about planting 1,150 trees plus connecting Eglinton to ravine systems and trails in the Humber and Don River Valleys. Laneways and sidewalks will be widened or newly built too if needed to improve access to shops plus alleviate both parking space need and excessive street traffic.

Work for Eglinton Connects is expected to take 25 years from 2025 to 2050. The initial estimated budget is at around $150 million but this is not a definitive figure as it is too early to estimate cost without detailed long-term plans according to the project’s planning team.

The Eglinton Connects project isn’t popular with everybody. Some people are expressing concern that it is just another war on cars that can result in heavy traffic jams in the area. Some concerns have also been raised about some people’s houses needing to be torn down to create space for parking or for laneway. Some people are worried that laneways behind their houses can become busy thoroughfares.

The concerns above have been discussed by the Eglinton Connects planning team. They’ve issued a PDF on July 8 talking about the possible issues raised by residents as well addressing some frequently asked questions such as whether there will be houses that will be demolished.

Things to Know About Eglinton Connects

Important facts to note are that most of Eglinton will be 4 lanes wide except for a short stretch of about 1.5 kilometre. Laneways will be only be used for local access. Only 2 properties will be rezoned and no houses are in danger of getting demolished or torn down. The process is still ongoing and there will be a lot more consultations with locals and councilors.

Other things to note are the following: